ENTER NOW FOR YOUR CHANCE TO WIN PART OF $1 MILLION IN PRIZES, INCLUDING ZHIYUN 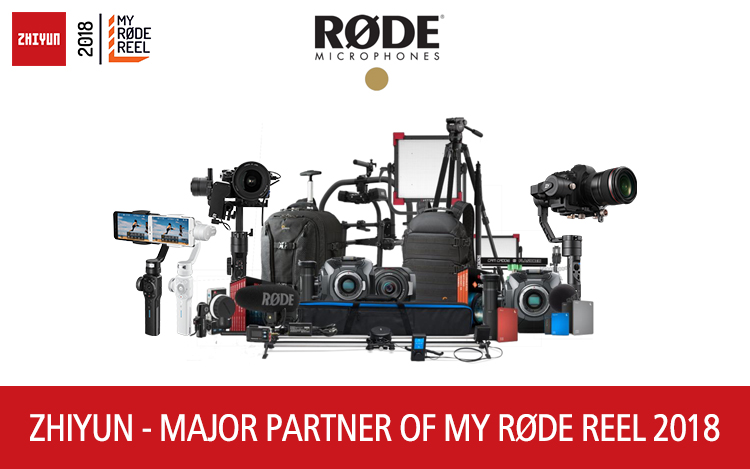 April 1st, 2018 Now in its 5th year, My RØDE Reel 2018 returns with a giant prize pool worth $1 million, of which Zhiyun is a generous sponsor. With over 12,000 entries from 90 countries since its beginning in 2014, the competition has grown to be the world’s flagship short film competition.

This year boasts 30 categories, both budding and professional filmmakers are encouraged to enter.

To be in the running, entrants are required to create a short film of 3 minutes or less, and a behind-the-scenes featurette showcasing the RØDE product/s used in the making of the film. It’s that simple.

This year the 6 MAJOR PRIZES return, including:

· Judges’ Film Award for the best short film, chosen by the 2018 panel of judges

· People’s Choice Award for the most popular short film

· Female Filmmaker Award for the best short film by a female filmmaker. This award was introduced in 2017 to encourage and celebrate women in the film industry

The best behind-the-scenes film awards include:

· Educational BTS Award for the most informative behind-the-scenes

A complete list of categories and more information can be found at www.myrodereel.com.

RØDE Microphones has teamed up with some of the most respected brands in filmmaking worldwide to assemble this year’s giant prize pool, including incredible products from Zhiyun.

“‘My RØDE Reel’ is an exciting event which gives creatives the opportunities to express their ideas, feelings and talent. Zhiyun is delighted to be the major partner and give out our best support to individual filmmakers. Our whole team truly wishes this event a success and we hope everyone can be inspired by this event.”